We received the Disney Infinity 2.0 Marvel Starter Pack last month, as well as three Power Disk Packs, from the publisher (disclaimer: provided for review purposes, no additional compensation was received). As with all things “Disney” and “Super Hero”, the kids were super excited to play. In fact, not a day has passed where the first thing I heard after work wasn’t “can we play Disney Infinity today?” 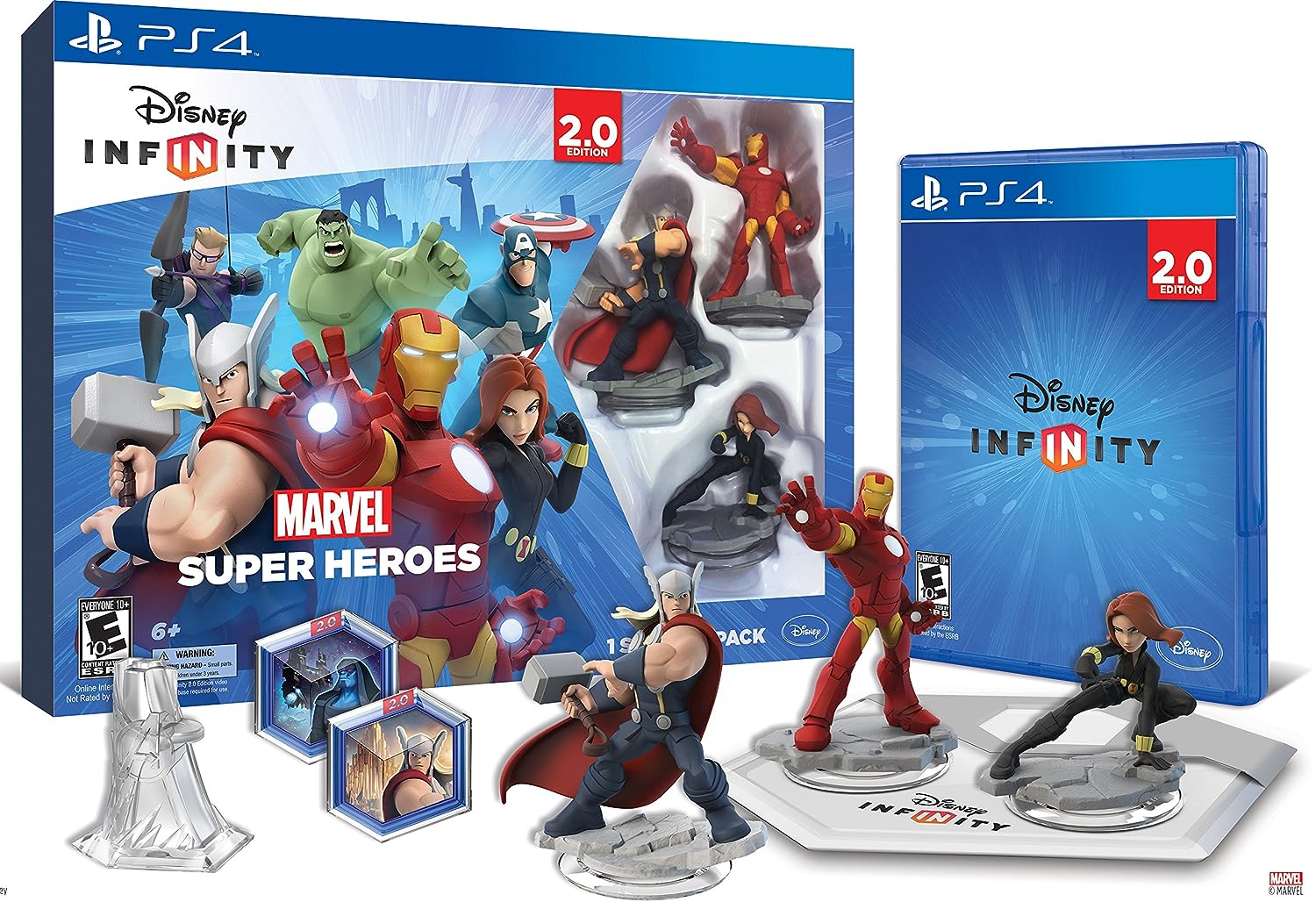 As can be seen in the image, the Starter Pack comes with several components, which can be expanded through the purchase of additional booster packs. Many of the 1.0 boosters will also work with 2.0, which you may wish to purchase to have access to other characters or powers. The different classes of product (with version-specific details where appropriate) are:

There are two modes of play, the “Toy Box” and the “Play Set”.

A Toy Box is an open-world level that can be created, customized, and shared with other players. Various mini-games and interactions can be embedded into each Toy Box. Place-able content for the Toy Box is unlocked during other game-play, or purchased with orbs collected throughout the game. Any Figure and Power Disk can be used in the Toy Box. The 2.0 Starter Packs include two hexagonal “Toy Box Game Disks”, which provide additional structured gameplay (tower defense and dungeon crawl) using any character in the Disney Infinity universe. These additional disks cannot be stacked with Power Disks, though the Figures playing the games could still stack on their own Power Disks. Almost all of the community Toy Boxes available at the time of initial review [release day] were created with 1.0, and the download site had no way to specifically filter for 2.0 content, which makes it hard to find, for example, “the most downloaded 2.0 toy boxes”, as the 2.0 levels will be drowned out by the 1.0 levels that have been around for years.

According to the information available on the link above, and on the Disney Infinity site, the Avengers Play Set can be played with the following characters:

Two additional characters from the Avengers Play Set, will be available soon:

Additionally, there are some Marvel characters who can “cross-over” to other Play Sets, like Nova (from the SpiderMan Play Set) and Rocket Racoon (from the Guardians Play Set).

Both Hulk and Iron Man from the Avengers Play Set can cross over to other Marvel Play Sets.

Each piece has what I assume to be an RFID chip that is identified by the USB base. Each Figure levels up and unlocks content individually after you place it in the base position allocated to your logged-in controller/account. Figures can be shared between players (and even between different consoles), with each player leveling up his own copy of the character. So the only reason to need two copies of the same Figure is if two players want to play that character at the exact same time.

Much of the Toy Box content appears to have been designed for platforming characters (Aladdin, Black Widow), so playing them with flying characters (Thor, Iron Man) feels like cheating. Why climb, grind rails, or trigger bridges, when you can fly directly to your destination? On the other hand, there are other mini-games that require flying characters. I believe there is a mechanism available to Toy Box creators for limiting which characters can play each game.

We’ve run into a few issues with the game, particularly when playing 1.0 Toy Box content and during split-screen local multi-player. Speaking of which, I really appreciate the fact that the game uses side-by-side split screen, rather than the more common top-bottom method. I think this is much more appropriate for a wide-screen format, especially for this type of game. From a game developer’s perspective, the launch-day issues are surprising limited, considering all the content, options, user-created levels, and backwards compatibility that the game delivers. We haven’t even begun to explore Toy Box creation beyond the tools introduced in the Tutorial Toy Box! This game is going to be a regular staple of our game-playing activities, and I am preparing to purchase the “Spider Man” Play Set soon…and possibly the “Frozen” Toy Box Set…and…so it begins!

%d bloggers like this:
We use cookies to ensure that we give you the best experience on our website. If you continue to use this site we will assume that you are happy with it.Ok